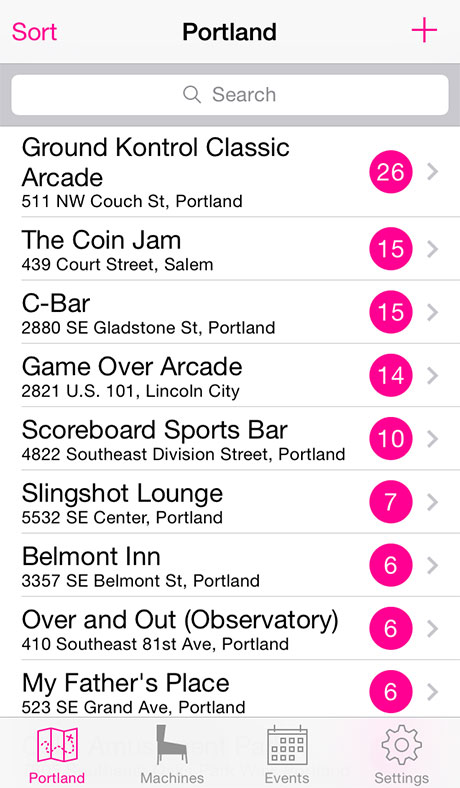 We’re happy to announce a MAJOR update to the Pinball Map iOS app!

This is the first update in, uh, four years. A lot has happened in iOS-land in those years. New phones, new tablets, new native UI, new resolutions.

The original developer of the Pinball Map iOS app, Isaac Ruiz, put together a solid app that held strongly for years and was instrumental in growing pinballmap.com. The last version of the app (2.0) worked great and lots of people loved it, but it was missing some important features from the website. Over the last four years, we came up with a nice list of improvements for it. Just like the website, where we’re continuously rolling out updates and new features, we’re always looking for ways to improve the user experience. “Oh, a user didn’t know that they can REMOVE machines from locations? WHY didn’t they know that? Seems like we can probably improve the user interface/experience there.” But, we have limited resources! We (Scott and Ryan) work on the website basically every day (current count: we’ve committed code updates 1,340 times), and Scott does the entire the Android app and also spent time refactoring the iOS app.

Then along comes Frank Michael Sanchez! He’s an illustrious iOS developer who saw that the app was in serious need of modernization. He reached out to us and volunteered his service to it. And he immediately proved his expertise. Scott put together a new Pinball Map API, so that Frank Michael could easily access all the data in a clean and efficient manner. And Frank Michael rewrote the entire app starting from scratch. We worked closely with him to make sure that key features were added, and we had a squadron of regional administrators beta testing it. The entire time we knew the app was in good hands. And no joke, he put the entire update together in like three months!

As always, the app is free (and makes no money from ads). Frank Michael put in his time for free, all so we can supply a better experience to you folks who use the site/apps (and who support it by updating it). If you’re looking to hire an iOS developer for your project, hit him up! We can’t recommend him enough.

Pinball Map App 3.0 has a modernized interface, supports retina displays and has both iPhone AND iPad versions, and has new features. And we plan to roll out updates with regularity. Since the app was released yesterday, we’ve already received a bunch of feedback (send yours here). And yes, we’ll add back “recently added” in version 3.1!

The iOS and Android apps both play a humongous role in spreading the word about the site (and about pinball in general). It’s just nice to be able to carry it around with you, with a simple, intuitive interface (though if you don’t have a mobile device that supports either app, please note that we added a simple mobile skin to the website – try it out!). Thanks for using the site/apps to support your regional pinball map.