As we mentioned in the last post, we’ve updated the format of machine comments. We said, “Instead of each machine allowing just one comment that users can edit and edit with no punctuation until it turns into nonsense, each comment will now stand on its own.”

What do we mean by unpunctuated nonsense? We mean this:

Edit: no idea where these images went, but they’re gone

Why are those so hard to read? Well, that’s partially our fault. When a user edits a comment, the previous comment sits there in the textbox. So they add their new comment on top of the old one (before it, or after it, or in the middle of it - whatever’s easiest!).

This is bad because the comments you leave about machines are really valuable! People use them to figure out where to play. Do you want to ride your bicycle five miles to play a crappy Earthshaker? No, nobody does. And now you don’t have to. The comments are not only useful to other humans, they’re also useful to operators (har har). Operators can check them out to see what’s broken. And they do! 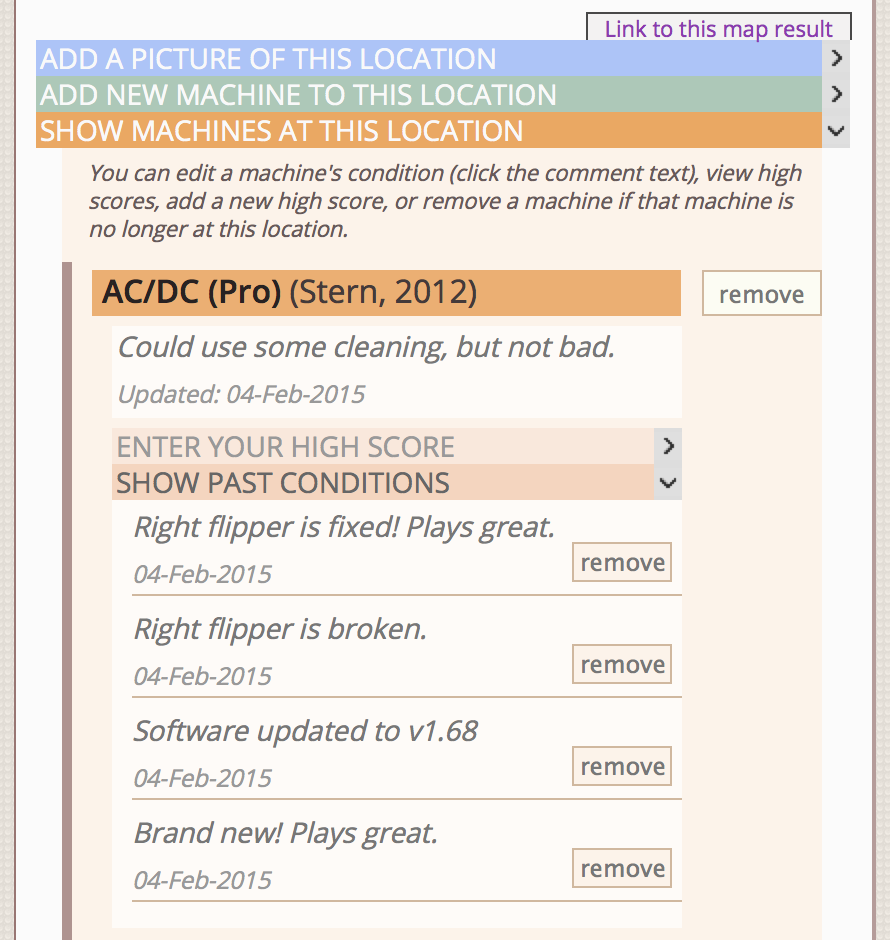 Pretend those don’t all have the same date on them, but are a succession of comments left over time (oldest on bottom). With this format, you can see the condition history of a machine in a simple, readable format. The current comment is on the top, and the others are below.

You can’t edit your comments anymore. When you activate the textbox to add a new comment, the previous comment clears out. But you can remove old ones (power to the people)! And we’ll only display the most recent ones.

At the moment this feature is only on the website. The apps will catch up. Oh, and about the next iOS app update: it will come out really soon. It re-adds machine comments into the location info view (as mentioned in the last post), and adds back the date of the last comment (we accidentally removed that), and more. We’ll post more details about it when it comes out.